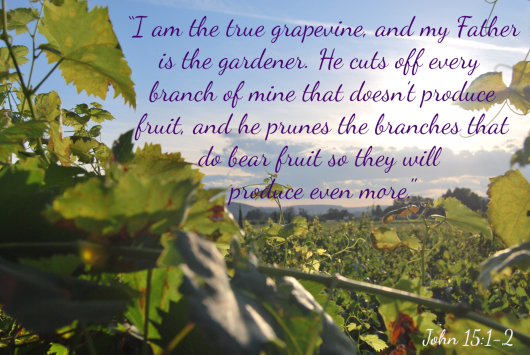 A couple of weeks ago we had four trees trimmed. It needed to be done. They were hanging low, touching the fence and getting a little too personal with our neighbor’s vehicles. But, the pruning was done aggressively, taking more than we expected, or wanted.

A range of emotions followed in my home—sadness because I felt like my trees were ruined, surprise over how sad I was, annoyance because it wasn’t what we wanted, anger because the bill still had to be paid…and finally, in time, acceptance.

As we worked through at our own pace, I thought about the pruning God does in us and how we might experience the same emotions.

“I am the true grapevine, and my Father is the gardener. He cuts off every branch of mine that doesn’t produce fruit, and he prunes the branches that do bear fruit so they will produce even more. You have already been pruned and purified by the message I have given you. Remain in me, and I will remain in you. For a branch cannot produce fruit if it is severed from the vine, and you cannot be fruitful unless you remain in me.”
John 15:1-4 NLT

The pruning process is not easy for us. God wants to draw us close to Him, and as He changes us from the inside out, He knows what isn’t producing fruit. From our perspective though, this looks like having to give up things, interests, behavior, or ways of life that we like or we’re used to. It means laying down our will for His.

The more we know God, the greater the desire to make these changes, but that doesn’t mean it’s easy. It can be unpleasant, uncomfortable, and downright painful. {Tweet this}

While God’s pruning is always what’s best for us, it doesn’t feel that way when the work is being done. It may feel like He’s pruning too aggressively, taking more than we expect, or want to give up.

There might be sadness because what we’ve always known is no longer what’s normal. It may mean a change in who we associate with or where we go, and making those changes can be hard, and even lonely. No matter how much we do want our lives to be different, there are still pieces or memories that we don’t want to give up completely. And that may surprise us.

There might be annoyance at what God is asking of us. We’ve worked and worked to move forward, but it’s still not enough. He’s still snipping and cutting, even from where we’ve made progress, and we want to shout, Stop! Enough trimming. You’re taking too much and it’s just too hard. We didn’t agree to this much pruning.

We might be angry. This isn’t what we asked for. The years of hardship. The loss. The sudden and drastic changes in our lives that don’t make sense to us. Years later we may see how He drew us close and we learned to trust Him in every way. But, right now, when it feels like we’re getting hit with one thing after another and we don’t understand why He’s letting it happen, it’s difficult to see how we can grow from it.

We want some explanation and to know how this will work out. We want our questions answered—How long? Why? When? But, when our questions don’t get answered, we have to wait and trust that the One pruning knows what He’s doing.

At some point, when the new becomes more familiar and comfortable, there is acceptance. We’ve become used to the changes—both the good and the bad, and it’s not as difficult to function. It’s no longer a constant struggle to get through each day because there’s been new growth. Instead of only seeing what’s missing, we see how God has blessed us. There is still grief and mourning, but there is also thankfulness and new beginnings.

Our trees were trimmed with the best of intentions and we received a credit when I kindly expressed how disappointed we were. God prunes us for His purpose and His glory, and when we turn to Him with our disappointment, exhaustion, sadness, and even our anger, He comforts us with love and compassion. {Tweet this}

God’s work will still be done, but He never cuts and walks away. He stays with us through the pain and the setbacks. He encourages us as we get back on our feet. And He rejoices with us as we begin to see the growth through His pruning.

Thank you for sharing your thoughts! I'm Laura, a follower of Christ, a wife, mother, writer, blogger, speaker, and contributor for Candidly Christian, LifeLetter Cafe and Thoughts About God. Over the years I've learned to trust God and depend on Him in all areas of my life. I believe with the Lord, nothing is impossible.

Looking for some extra encouragement? Enter your email address to receive new articles right in your inbox. (Watch for the email (check your spam folder) to confirm your subscription.) Privacy Policy

You can also find me here 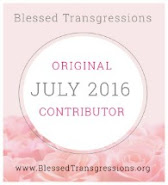